It's important to give everything in your life the effort it requires to succeed, but that doesn't mean you're limited to one thing.

The title quote comes from Ron Swanson, a character on Parks and Recreation. Here's the scene if you haven't seen (or don't remember) it:

When I first viewed the episode with the scene above, I thought about it pretty much as Ron says it -- don't do too much to the point where you stretch yourself too thin and make mistakes. Or, don't do so many things that you forget to do things that are important to you. Something like that.

I was bothered by these thoughts because that's not how I live my life. But, at the same time, Ron's advice, sage as always, seemed like something I should consider.

Eventually I came to the realization that part of both sides of this thing could be true, and I think they are. That is to say that although Ron's advice is worthwhile, the context in which he explains what it means is wrong (gasp!).

Ron explains that he attempted to work at a sheet metal factory and a tannery while finishing middle school. What we don't see in this clip is that he's speaking to Leslie about her balancing a job as a city councilwoman and as director of the parks department.

When you listen to Ron, you come to the conclusion that one can't work two full-time jobs. That part is true for most of us non-superheros. (Don't forget to note that for Ron, it's really three full-time jobs when you consider middle school part of the mix.)

All of this logic relies on the assumption that effort requires time.

What the heck does that mean?

Well, it's true that you probably shouldn't hold two full-time jobs. That's 80+ hours per week, and nobody can do something to the best of their ability 80 hours each week. If you did that, you would likely end up half-assing both jobs.

So the assumption becomes that to whole-ass one thing requires that it be the only thing. I disagree.

To whole-ass one thing simply means that you have the time to give it full attention and effort. In the United States we tend to think that takes 40 hours every week. It doesn't. It depends on the thing.

So, does that mean Leslie could be a councilwoman and a parks director and do both with one-hundred percent effort? Probably not, simply because the expectation for both of those jobs is that they take 40 hours per week to do well.

Stop using time to measure how much effort you applied. Instead, create a set of collective goals throughout your life (not just as your day job) that, together, can all be accomplished while being given all of the effort and attention you have to give. The time you have to give each thing to feel that way will vary.

I'll finish with a quick, #shamelessplug. I was reminded of this quote by my wife, when she used it to create a print. It is for sale, along with several other prints, in her Etsy shop. 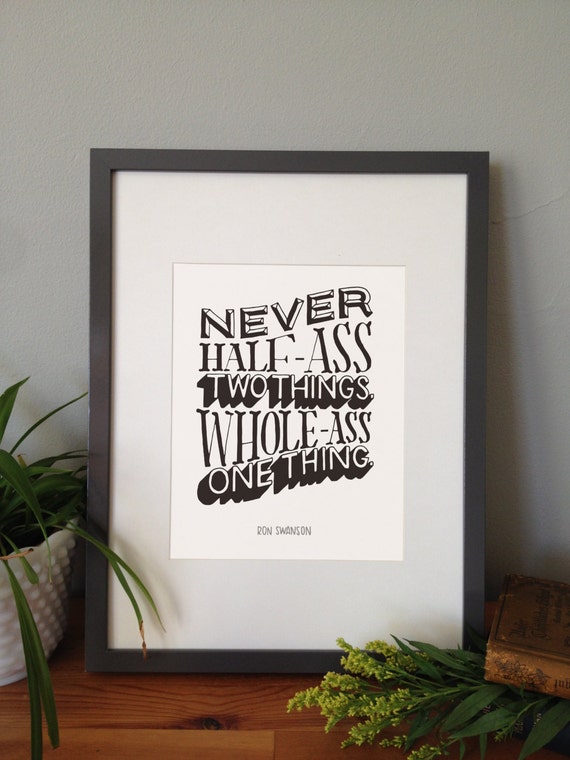 Photo by Katie Davis via Etsy

I walked. The long way.

Your Team Affects The Perception Of You

How people perceive your work is greatly influenced by your team's performance. It's time for you to evaluate and improve your team.